Facebook wants to help connect brands to creators so they can work out sponsored content and product placement deals, even if it won’t be taking a cut. Confirming our scoop from May, Facebook today launched its Brand Collabs Manager. It’s a search engine that brands can use to browse different web celebrities based on the demographics of their audience and portfolios of their past sponsored content. 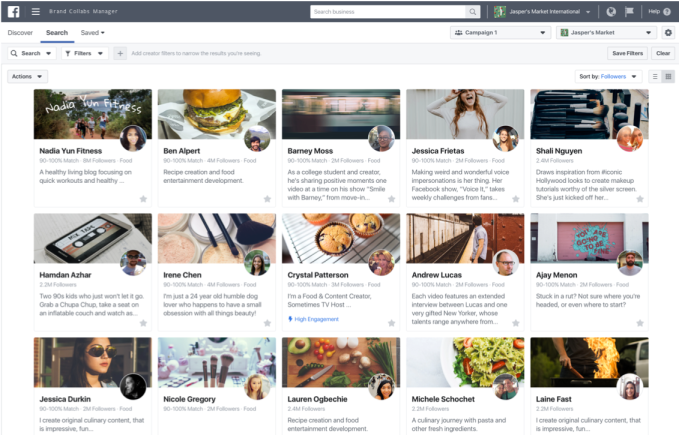 Creators hoping to score sponsorship deals will be able to compile a portfolio connected to their Facebook Page that shows off how they can seamlessly work brands into their content. Brands will also be able to find them based on the top countries where they’re popular, and audience characteristics like interests, gender, education, relationship status, life events or home ownership.

Facebook also made a wide range of other creator monetization announcements today:

Facebook’s Creator app that launched on iOS in November rolled out globally on Android today (this link should be active soon once the app populates across Google Play). The Creator app lets content makers add intros and outros to Live broadcasts, cross-post content to Twitter and Instagram, see a unified inbox of their Facebook and Instagram comments plus Messenger chats, and more ways to connect with fans.

Ad Breaks, or mid-video commercials, are rolling out to more U.S. creators, starting with those that make longer and original content with loyal fans. Creators keep 55 percent of the ad revenue from the ads.
Patreon-Style Subscriptions are rolling out to more creators, letting them charge fans $4.99 per month for access to exclusive behind the scenes content plus a badge that highlights that they’re a patron. Facebook also offers microtransaction tipping of video creators through its new virtual currency called Stars.

Top Fan Badges that highlight a creator’s most engaged fans will now roll out more broadly after a strong initial reaction to tests in March.
Rights Manager, which lets content owners upload their videos so Facebook can fingerprint them and block others from uploading them, is now available for creators not just publishers.

Facebook also made a big announcement today about the launch of interactive video features and its first set of gameshows built with them. Creators can add quizzes, polls, gamification and more to their videos so users can play along instead of passively viewing. Facebook’s Watch hub for original content is also expanding to a wider range of show formats and creators.

Facebook needs the hottest new content from creators if it wants to prevent users’ attention from slipping to YouTube, Netflix, Twitch and elsewhere. But to keep creators loyal, it has to make sure they’re earning money off its platform. The problem is, injecting Ad Breaks that don’t scare off viewers can be difficult, especially on shorter videos. 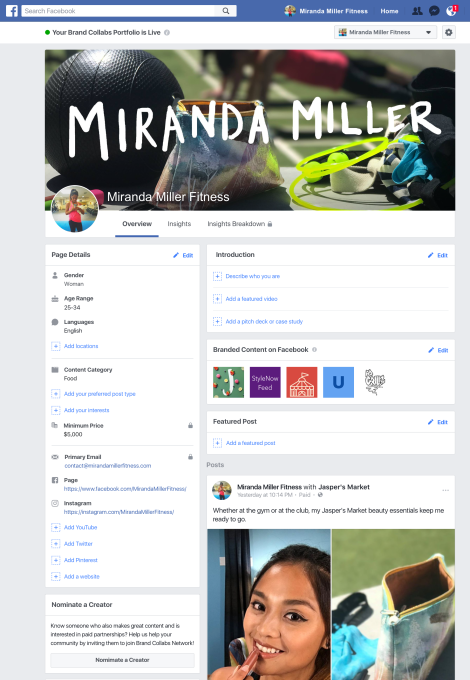 But Vine proved that six seconds can be enough to convey a subtle marketing message. A startup called Niche rose to arrange deals between creators and brands who wanted a musician to make a song out of the windows and doors of their new Honda car, or a comedian to make a joke referencing Coca-Cola. Twitter eventually acquired Niche for a reported $50 million so it could earn money off Vine without having to insert traditional ads. [Disclosure: My cousin Darren Lachtman was a co-founder of Niche.]

Vine naturally attracted content makers in a way that Facebook has had some trouble with. YouTube’s sizable ad revenue shares, Patreon’s subscriptions and Twitch’s fan tipping are pulling creators away from Facebook.

So rather than immediately try to monetize this sponsored content, Facebook is launching the Brand Collabs Manager to prove to creators that it can get them paid indirectly. Facebook already offered a way for creators to tag their content with disclosure tags about brands they were working with. But now it’s going out of its way to facilitate the deals. Fan subscriptions and tipping come from the same motive: letting creators monetize through their audience rather than the platform itself.

Spinning up these initiatives to be more than third-rate knockoffs of Niche, YouTube, Patreon and Twitch will take some work. But hey, it’s cheaper for Facebook than paying these viral stars out of pocket.

A leaked look at Facebook’s search engine for influencer marketing