Facebook is becoming a marketplace for enterprise apps that help Group admins manage their communities.

To protect itself and its users in the wake of the Cambridge Analytica scandal, Facebook locked down the Groups API for building apps for Groups. These apps had to go through a human-reviewed approval process, and lost access to Group member lists, plus the names and profile pics of people who posted. Now, approved Groups apps are reemerging on Facebook, accessible to admins through a new in-Facebook Groups apps browser that gives the platform control over discoverability.

Facebook confirmed the new Groups apps browser after our inquiry, telling TechCrunch, “What you’re seeing today is related to changes we announced in April that require developers to go through an updated app review process in order to use the Groups API. As part of this, some developers who have gone through the review process are now able to access the Groups API.” 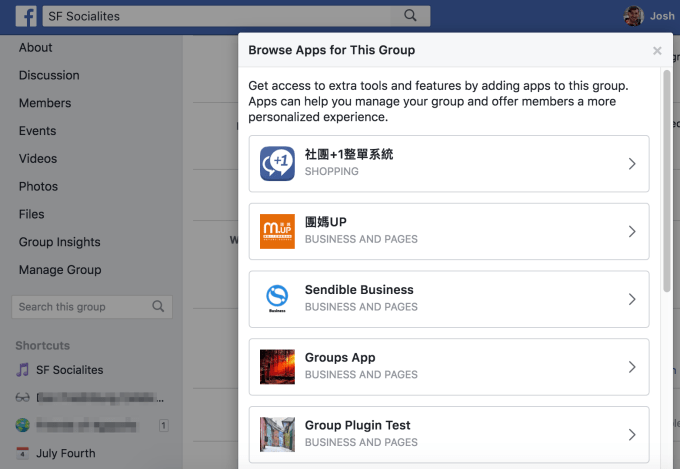 Facebook wouldn’t comment further, but this Help Center article details how Groups can now add apps. Matt Navarra first spotted the new Groups apps option and tipped us off. Previously, admins would have to find Group management tools outside of Facebook and then use their logged-in Facebook account to give the app permissions to access their Group’s data.

Groups are often a labor of love for admins, but generate tons of engagement for the social network. That’s why the company recently began testing Facebook subscription Groups that allow admins to charge a monthly fee. With the right set of approved partners, the platform offers Group admins some of the capabilities usually reserved for big brands and businesses that pay for enterprise tools to manage their online presences.

Becoming a gateway to enterprise tool sets could make Facebook Groups more engaging, generating more time on site and ad views from users. This also positions Facebook as a natural home for ad campaigns promoting different enterprise tools. And one day, Facebook could potentially try to act more formally as a Groups App Store and try to take a cut of software-as-a-service subscription fees the tool makers charge.

Facebook can’t build every tool that admins might need, so in 2010 it launched the Groups API to enlist some outside help. Moderating comments, gathering analytics and posting pre-composed content were some of the popular capabilities of Facebook Groups apps. But in April, it halted use of the API, announcing that “there is information about people and conversations in groups that we want to make sure is better protected. Going forward, all third-party apps using the Groups API will need approval from Facebook and an admin to ensure they benefit the group.”

Now apps that have received the necessary approval are appearing in this Groups apps browser. It’s available to admins through their Group Settings page. The apps browser lets them pick from a selection of tools like Buffer and Sendible for scheduling posts to their Group, and others for handling commerce messages. 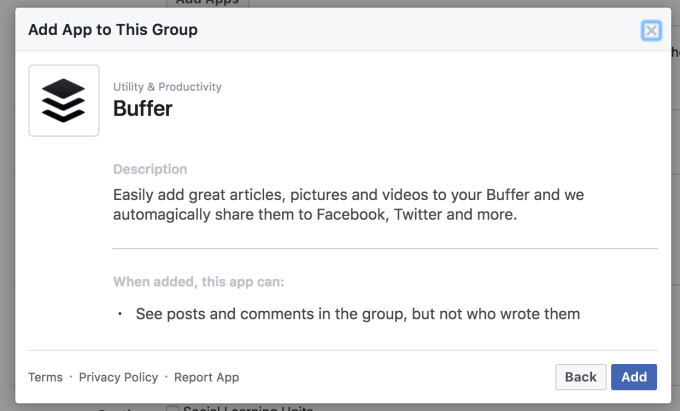 Facebook is still trying to bar the windows of its platform, ensuring there are no more easy ways to slurp up massive amounts of sensitive user data. Yesterday it shut down more APIs and standalone apps in what appears to be an attempt to streamline the platform so there are fewer points of risk and more staff to concentrate on safeguarding the most popular and powerful parts of its developer offering.

The Cambridge Analytica scandal has subsided to some degree, with Facebook’s share price recovering and user growth maintaining at standard levels. However, a new report from The Washington Post says the FBI, FTC and SEC will be investigating Facebook, Cambridge Analytica and the social network’s executives’ testimony to Congress. Facebook surely wants to get back to concentrating on product, not politics, but must take it slow and steady. There are too many eyes on it to move fast or break anything.