Facebook made two announcements about ad transparency today — one around the ads purchased by any Page and another around expanding its recently announced archive of political ads.

It seems like ad transparency is a big focus today, as Twitter just launched its own Ads Transparency Center, allowing anyone to see ads bought by any account.

In terms of bringing more transparency to Facebook Pages, the company says there will be a new section in Pages allowing users to bring up general information about Pages (like recent name changes and date of creation), and another where anyone can view all the active ads the Page is currently running.

As with any ad on Facebook, you’ll be able to flag ads viewed this way if you think they violate Facebook policies, and they will then be reviewed. Speaking to journalists via videoconference, Rob Leathern, a director of product management on the Facebook advertising team, noted that this is in addition to the “proactive” reviewing, performed both by humans and artificial intelligence, that Facebook already performs on every ad.

COO Sheryl Sandberg also said that Facebook is doing more to review political ads, which is resulting in more delays before those ads appear.

“We do not like the delays in the system [but] more manual review and more checks means more delays,” she said.

Now it might not seem like Facebook is sharing a tremendous amount of information here, especially since you only see the ad itself, not additional context like targeting, money spent or past advertising. When asked about this, Sandberg acknowledged that Facebook has more to do.

“There are lots of ways we can do more,” she said. “These are the first steps.” 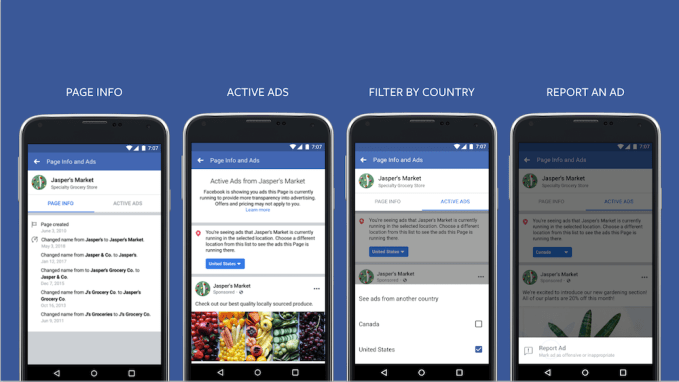 Sandberg also said she doesn’t expect the additional transparency to affect ad spend on Facebook. She suggested that advertisers are aware of the changes, and while some of them have expressed concerns about competitors seeing their advertising, most of them are on-board.

“I think advertisers for most part stand behind the ads they’re running,” she said. “You actually can see a lot of your competitors’ ads [already], you just have to catch them.”

Meanwhile, Facebook says it will be launching its political archive in Brazil next month start accepting registration from political advertisers in Brazil. These archives only start saving ads from the date that they launch (the one for the U.S. launched in May), but ultimately the plan is to store things for up seven years at a time.

As for why the archive will also include ads from news publishers that promote articles with political content, Sandberg said, “We decided that our goal is transparency. We are just erring on the side of being transparent.” She also noted that Facebook is now placing those ads in a separate section for “promoted news.”

Sandberg was also asked about recent leaks to Motherboard and other publications of Facebook’s training material around hate speech — specifically around how it views white supremacy and neo-Nazis. Why not just make that training material public?

Sandberg argued that Facebook has already released extensive information about its policies, and she suggested that the leaked material is often taken out of context, outdated or just represents “bad training things.”

“I don’t think any other company has come close to the transparency we’ve put out,” she said.